In Dinant and its surroundings, you don’t need a time machine to travel to the past. The history of the picturesque villages in this region goes way back in time. A little more remote, you can find the remains of ancient castles, hidden in the woods. A long time ago, these ancient places were the setting for heroic battles and tragic love stories. And drama, lots of drama!

Dinant, Daughter of the Meuse river

The Belgian city of Dinant, situated along the Meuse river, attracts thousands of visitors each year. Day tourists usually love to take pictures with the statue of Mr. Sax or one of the colorful saxophones on the Charles de Gaulle bridge. And of course, there are those colorful houses contrasting against the dark rock behind them: a picture perfect that everyone wants to capture. Yes, me too! It’s a classic image of Belgium.

The eye-catcher of the city of Dinant is the citadel, watching over the city and its inhabitants from above. The inhabitants of Dinant are often called the ‘Copères’. They probably owe that nickname to the many coppersmiths that used to be located there in medieval times, although there are different theories about this. The first castle in Dinant would have been built in the 11th century, but the castle was destroyed and rebuilt several times. It’s a building with a turbulent past. You can reach the citadel in different ways. You can drive up by car. But If you’re looking for a more authentic itinerary, you can take the cable car, which is quite unique in Belgium. Or you can choose for the sporty way and go by foot, but then you have to climb more than 400 steps. It is up to you. 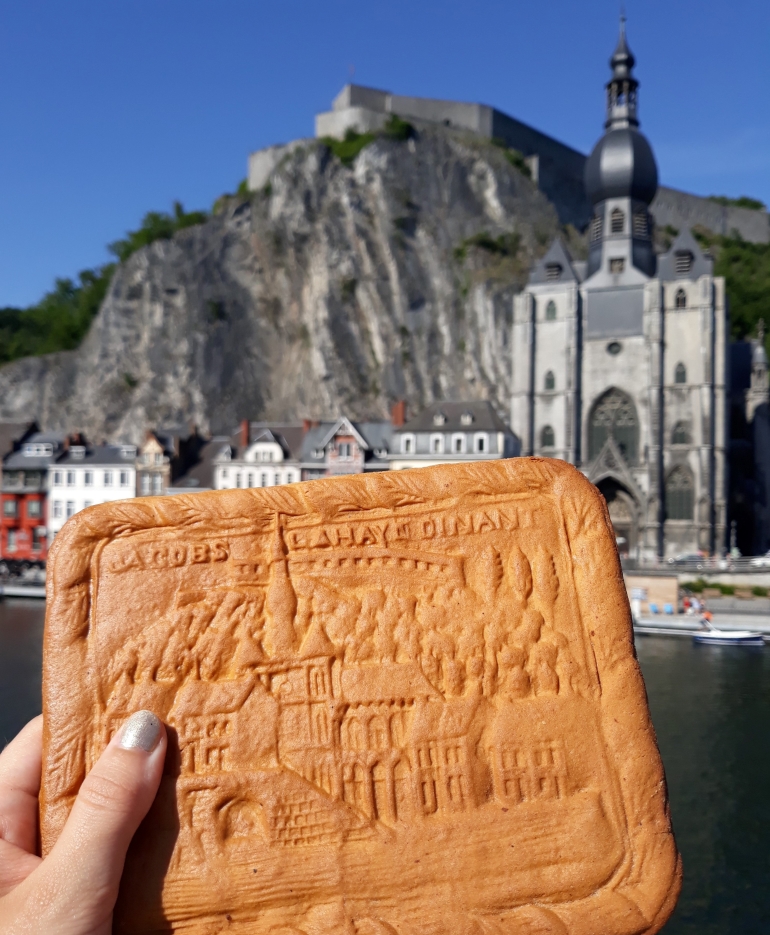 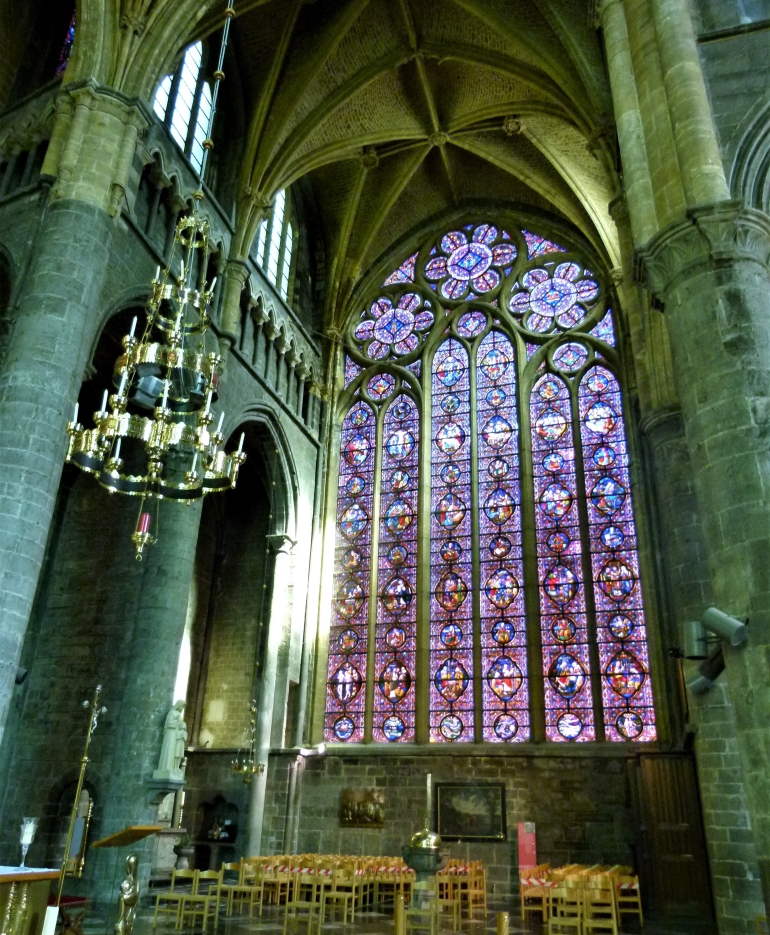 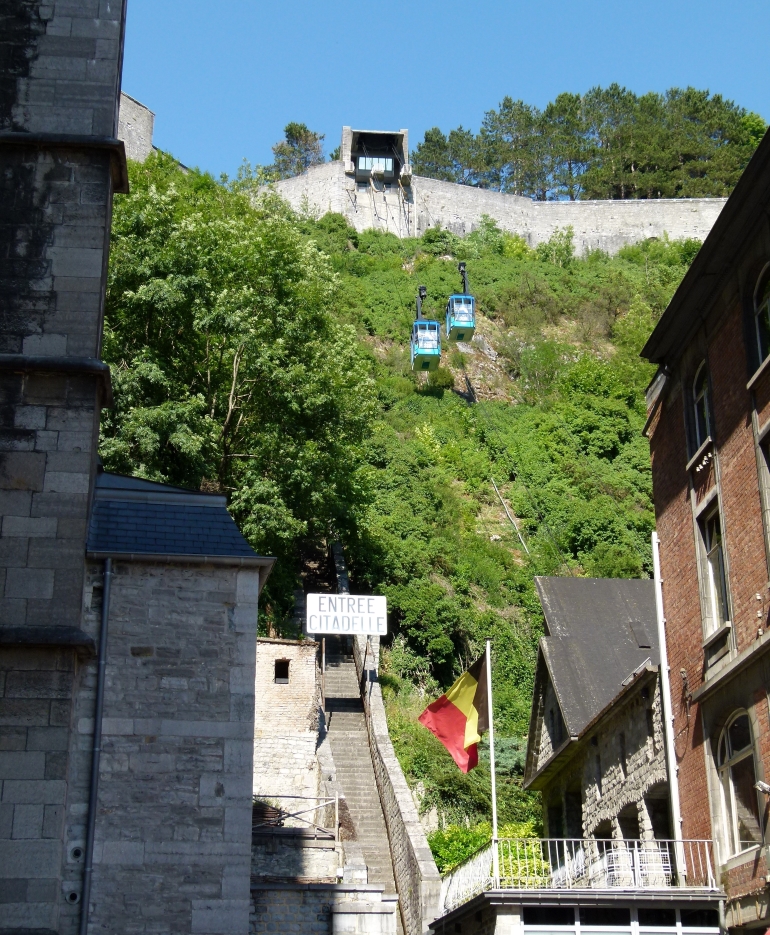 Something you should definitely do is visiting one of the local bakeries in town. They all sell the ‘Couque de Dinant’, a biscuit made of honey and flour. Be careful if you want to postpone your next visit to the dentist, the biscuit is extremely hard. Don’t break your teeth! Patisserie Jacobs is one of the oldest bakeries in town, having started with the production of this biscuits in 1860 (!)

Three ladies with a broken heart

Two kilometers away from Dinant, the medieval town of Bouvignes-sur-Meuse is located along the river banks. Once, this small town was a strong opponent of Dinant. Behind the church, a walking path leads to the ruins of Crèvecoeur, of which the oldest part dates back to 1320. The site is free of access. You will be surprised by the beautiful view over the Meuse valley. You can even see the ruins of Poilvache in the background. On the small town square of Bouvignes-sur-Meuse, the ‘Maison du patrimoine médiéval mosan’ is located, a historical museum of the region. 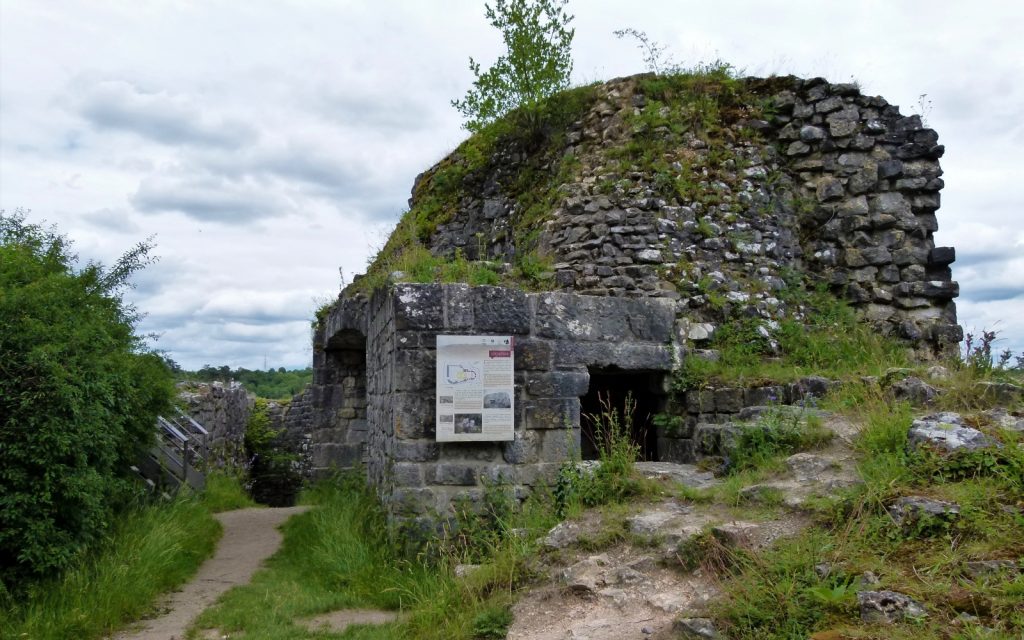 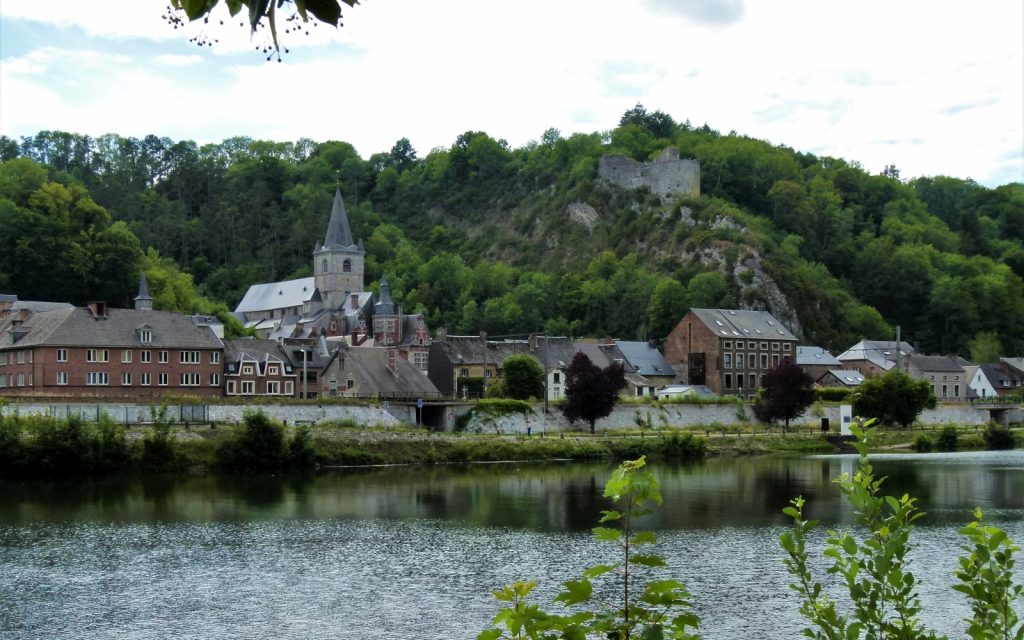 The name “Crèvecoeur” means “heartache” and refers to the legend of the three ladies. A heartbreaking story. The legend tells that three women were in the castle at the time that the soldiers of the French King Henry II tried to invade. The women saw how their loved ones were killed defending the castle. They took each other’s hands and threw themselves from the castle tower.

The village of Falaën is located in Belgium but you have to admit, it could have been straight out of a fairytale book, right? Falaën is one of the most beautiful villages of Wallonia. The village center of Falaën is characterized by its houses of gray limestone and its narrow streets. You can also see the towers of the castle farm, which dates back to the 17th century. The chains at the entrance are a remnant of the drawbridge, used to keep enemies out when the castle farm was still surrounded by a moat. The castle farm is private property and cannot be visited. Too bad. 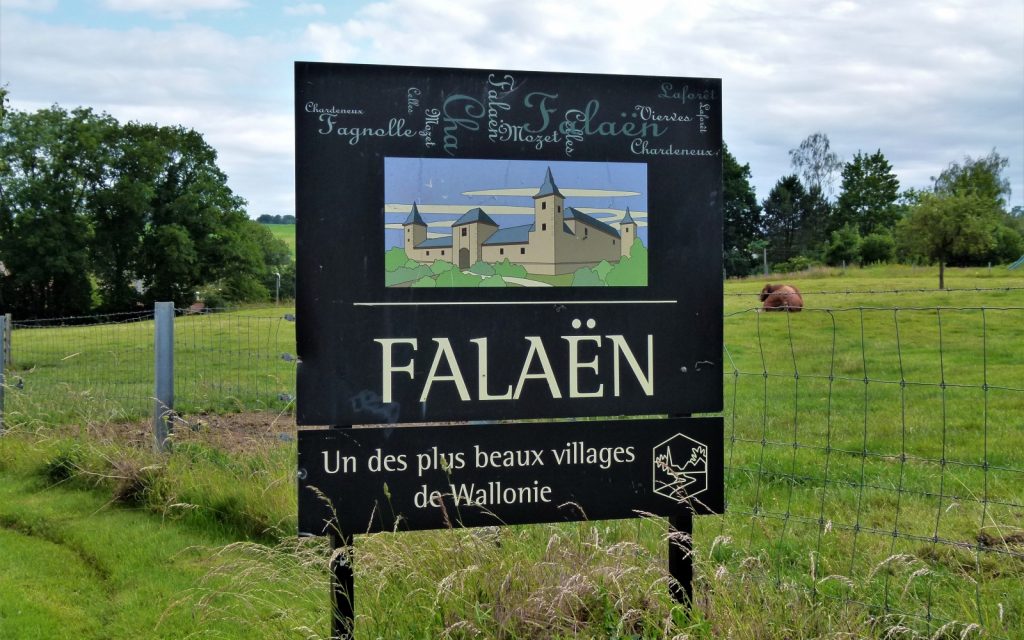 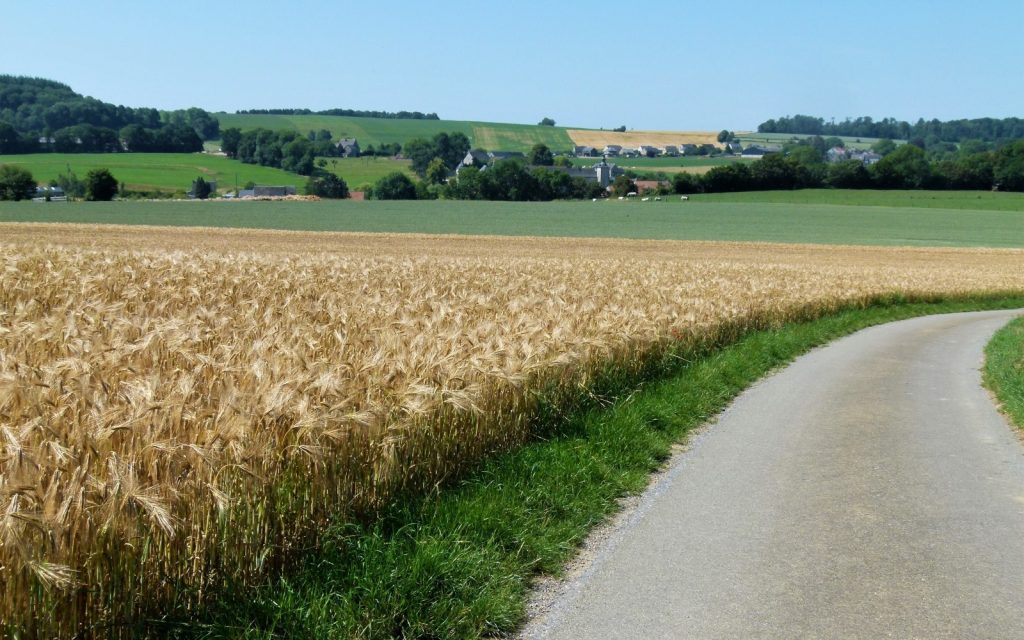 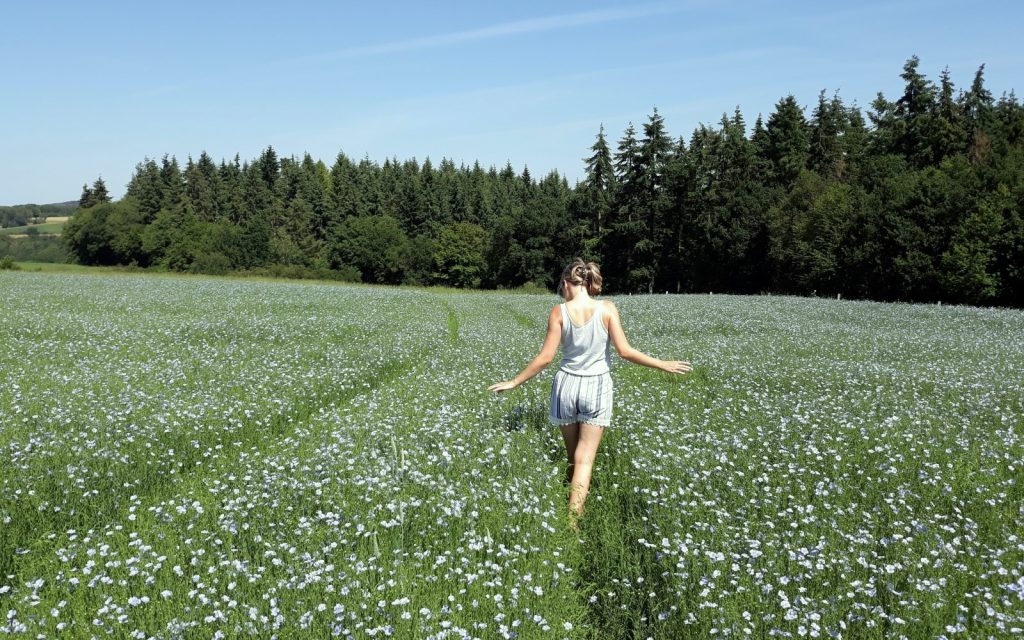 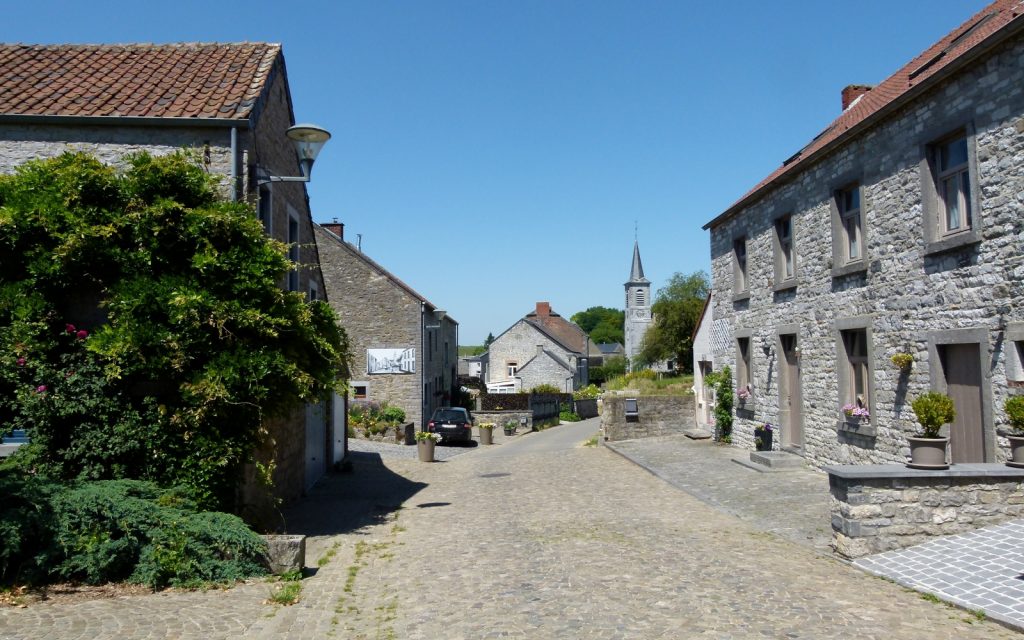 In the Molignée Valley, you can find a variety of local products. Just think of trout from the Molignée river and escargots from the snail farm in Warnant. And cheese, of course. Not only the well-known Maredsous cheese deserves your attention. There is also a local farm in Falaën producing some really good cheeses. Go taste this local specialties in one of the restaurants along the main road.

From the village center of Falaën, you can make a beautiful walk to the castle ruins of Montaigle. Follow the signs with a red rectangle No. 5, the first one is near the church. You leave the village along a field road and walk straight into the forest. The castle ruins are situated on a rocky hill in the woods. I think I just found paradise! Explore the remains of this medieval castle – once a majestic fortress with knights hall and observation tower – and let your imagination run free. The castle was destroyed in 1554, but with a little imagination, medieval castle life will come back to life during your visit. 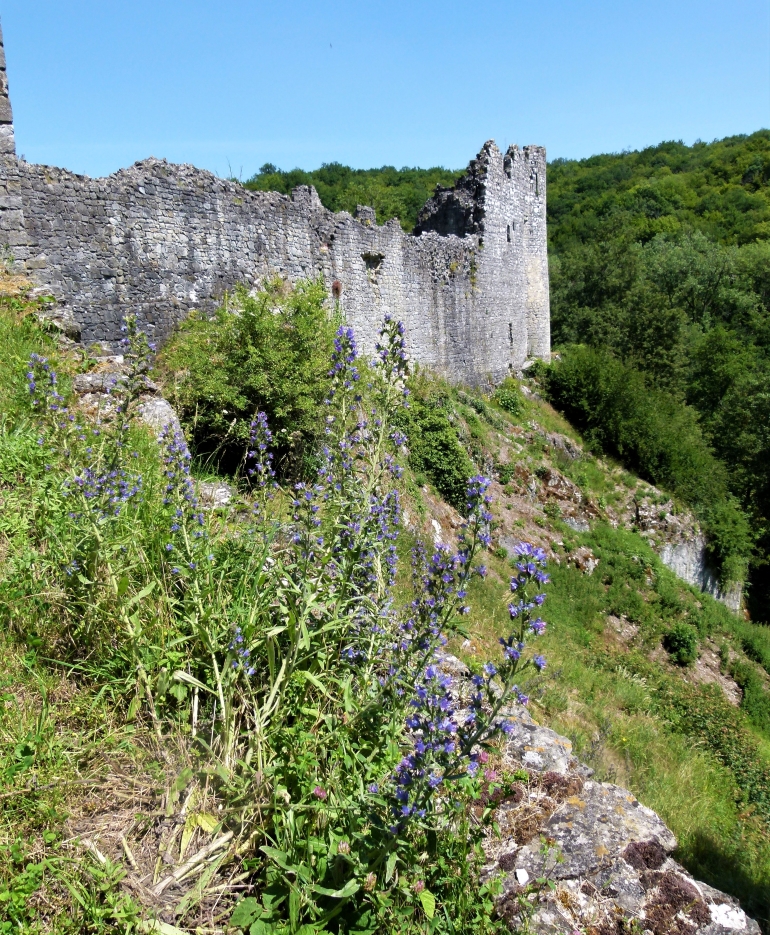 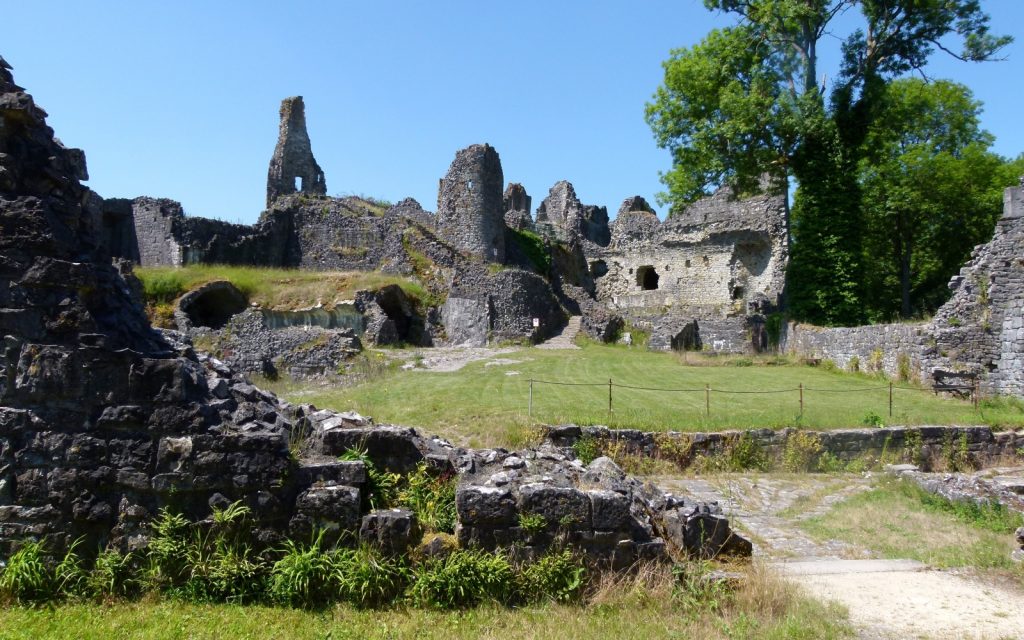 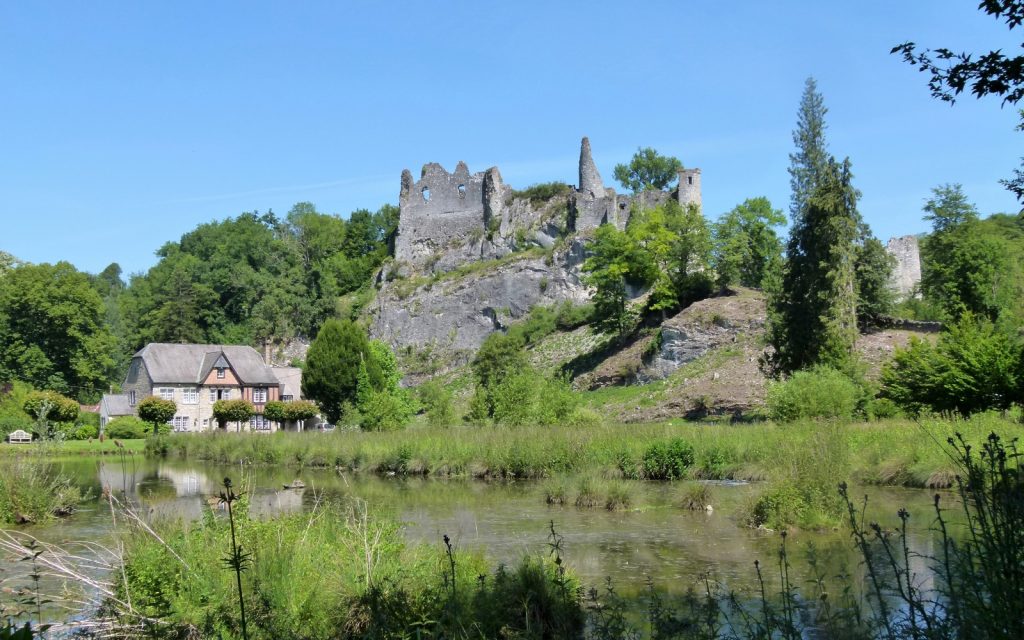 Montaigle Castle once belonged to “de Berlaymont” family. One day, Gilles de Berlaymont met a beautiful young woman in the surrounding forest. It was Midone, the daughter of the lord of Bioul. Midone and Gilles fell in love and even wanted to marry each other, but the father of Midone was furious and wouldn’t give his blessing. The ending of this story is just as tragic as the story of Romeo and Juliet. Midone died when she tried to intervene in a fight between her lover and her father. According to legend, the ghost of Midone is still present at the ruins.

At the former rail station of Falaën, you can rent a railbike to pedal to Maredsous, right through the heart of the green Molignée Valley. The track to Maredsous requires quite some effort, but on the way back, you will hardly have to pedal. The total distance is six kilometers long (from Falaën to Maredsous and back).

Once you have arrived in Maredsous, you can reward yourself with a refreshing beer and a cheese platter in the abbey. Maredsous Abbey is a Benedictine monastery, picturesquely located in the woods. From the terminus of the railbikes, it’s about a fifteen minute walk. The abbey church is freely accessible. When you want to see more of the abbey, you can take a guided tour, but keep in mind that only certain parts of the abbey are open to public. 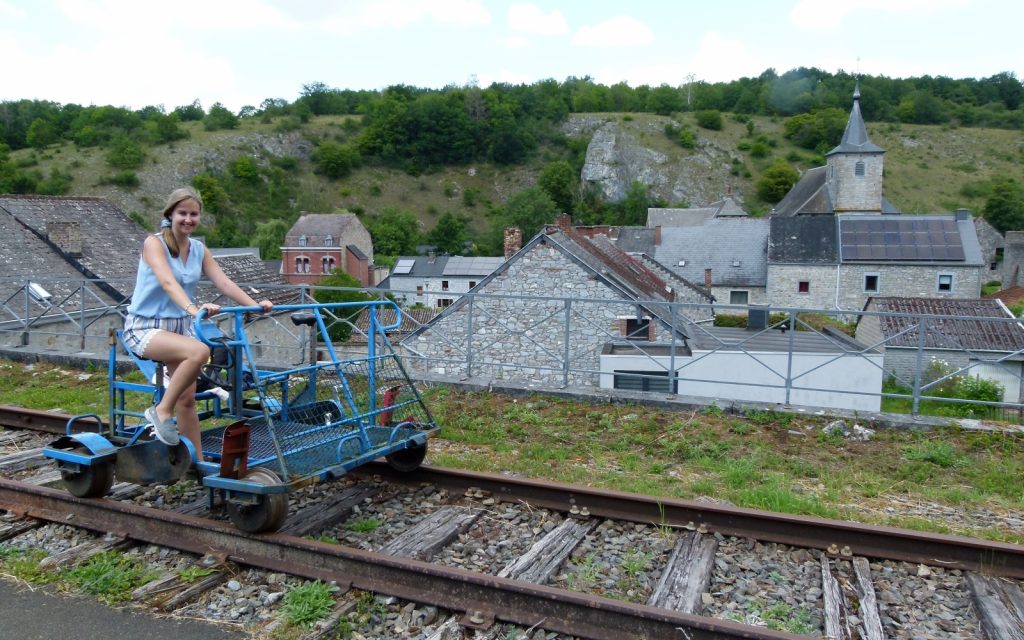 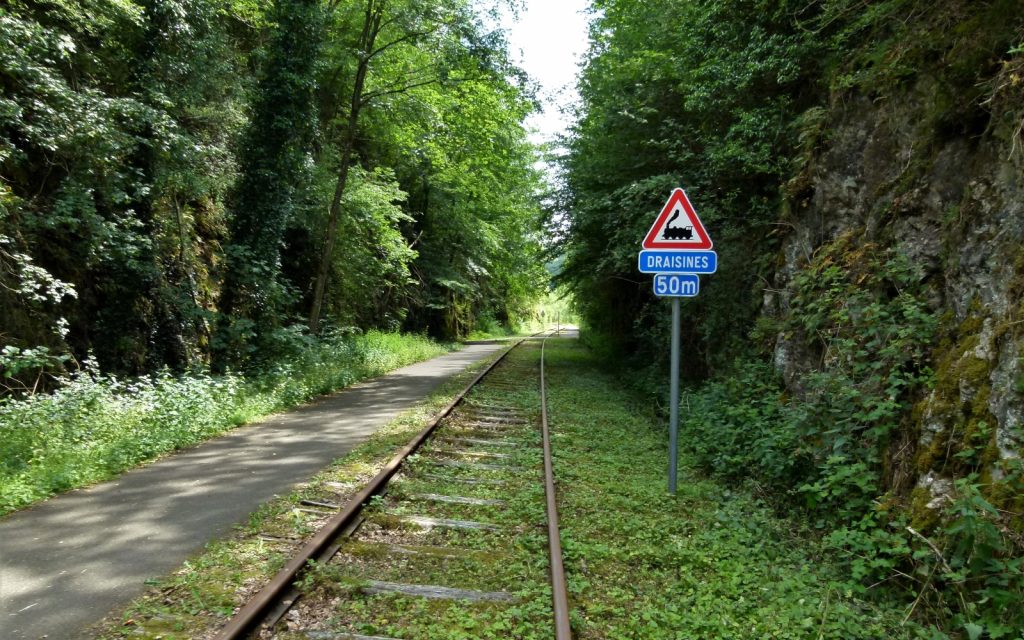 Less known is the Maredret Abbey, within walking distance of Maredsous. A community of Benedictine sisters lives here. The abbey itself cannot be visited, but there is a shop with handmade products (candles, paintings, ceramics, …).

With its historic village center, Celles is one of the prettiest villages in Wallonia. The stone pathway near the church takes you to the Saint-Hadelin monastery, overlooking the village from the top of a hill. Follow the signs with the red triangle to walk to the castle of Vêves. It is a circular walk of about seven kilometers. The castle can be visited and children can even go on a treasure hunt, dressed as a knight or princess. Together with the whole family, you can search the Holy Grail by solving some riddles. The fairytale castle is owned by the same family for centuries: the Liedekerke Beaufort family. 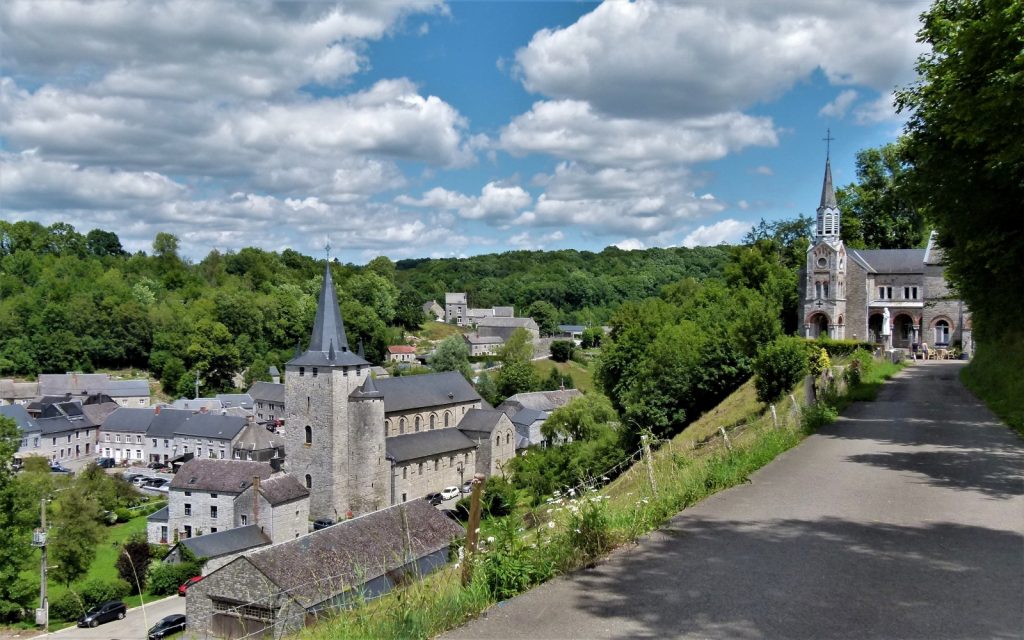 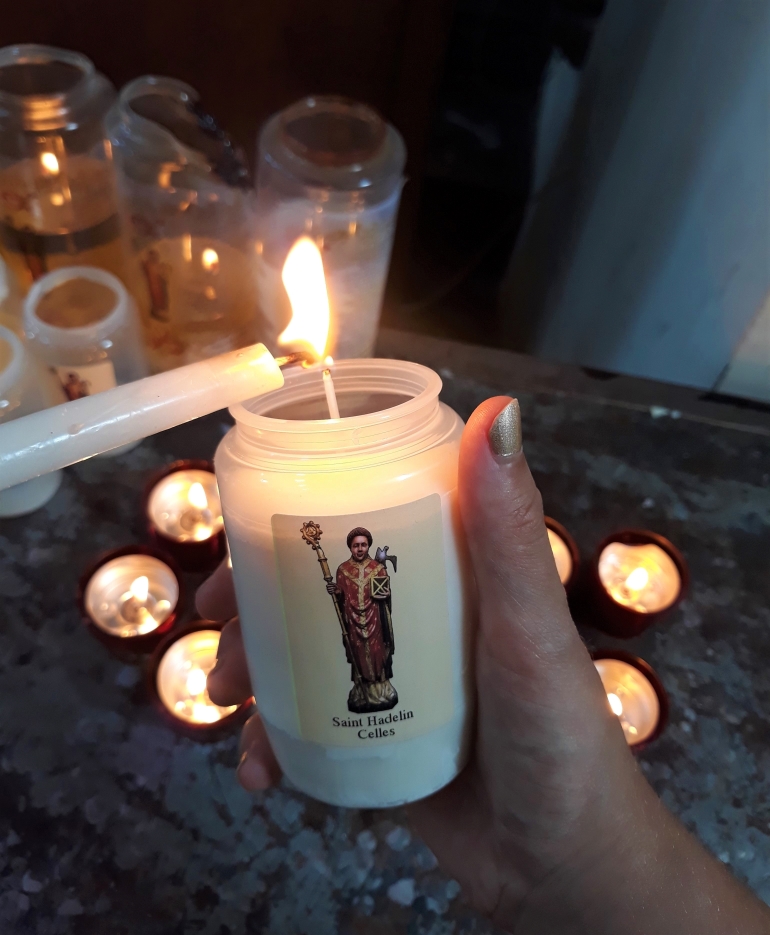 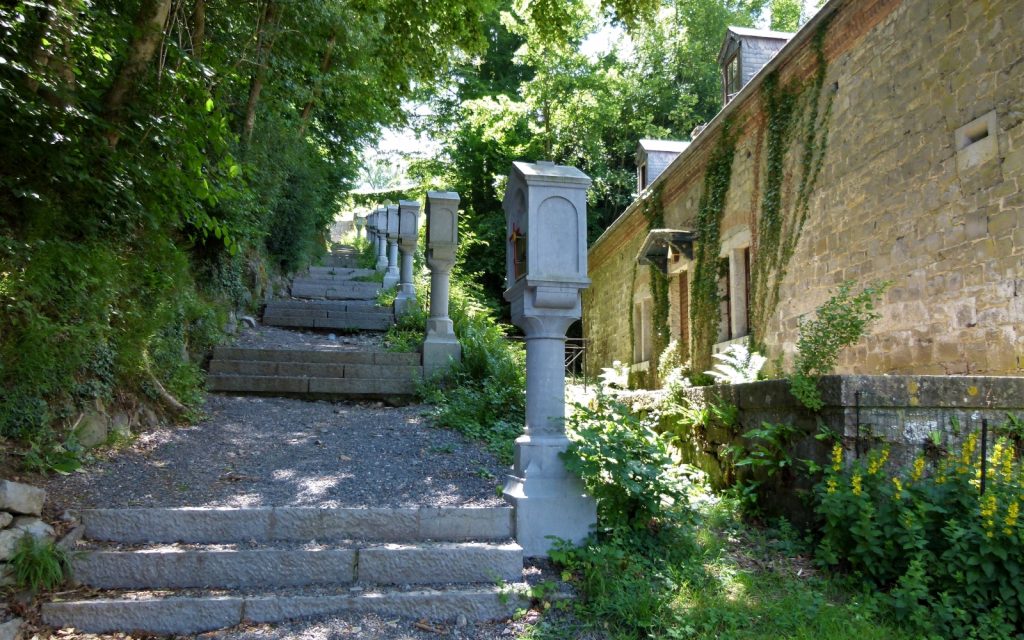 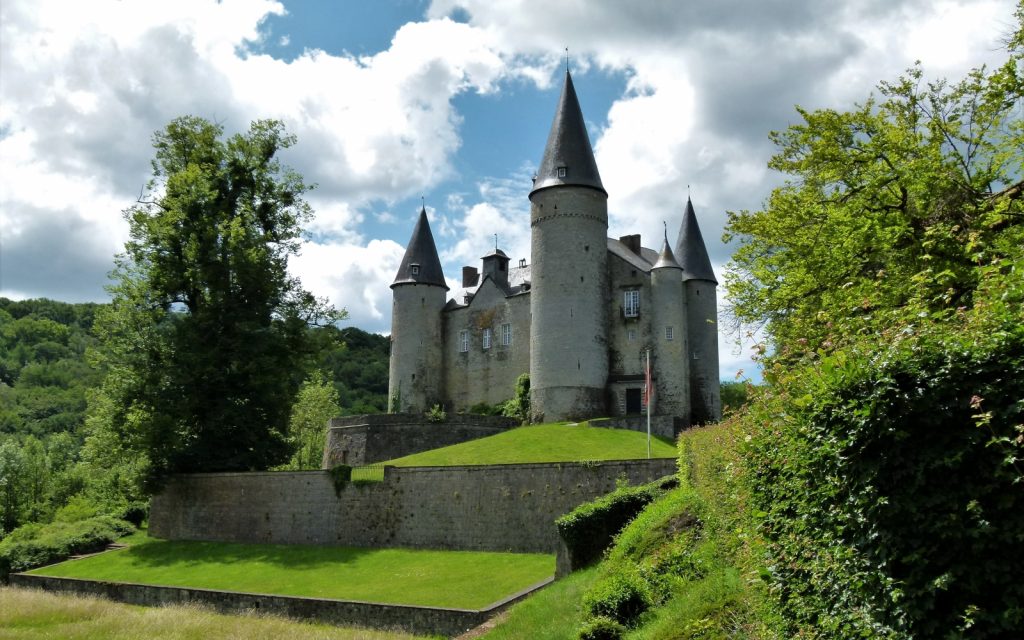 Take a look inside the church of Celles, which has two underground crypts. The imposing, Romanesque building was named after Saint Hadelinus, who settled as a hermit in this region in the 7th century. The village became a place of pilgrimage after he performed several miracles.